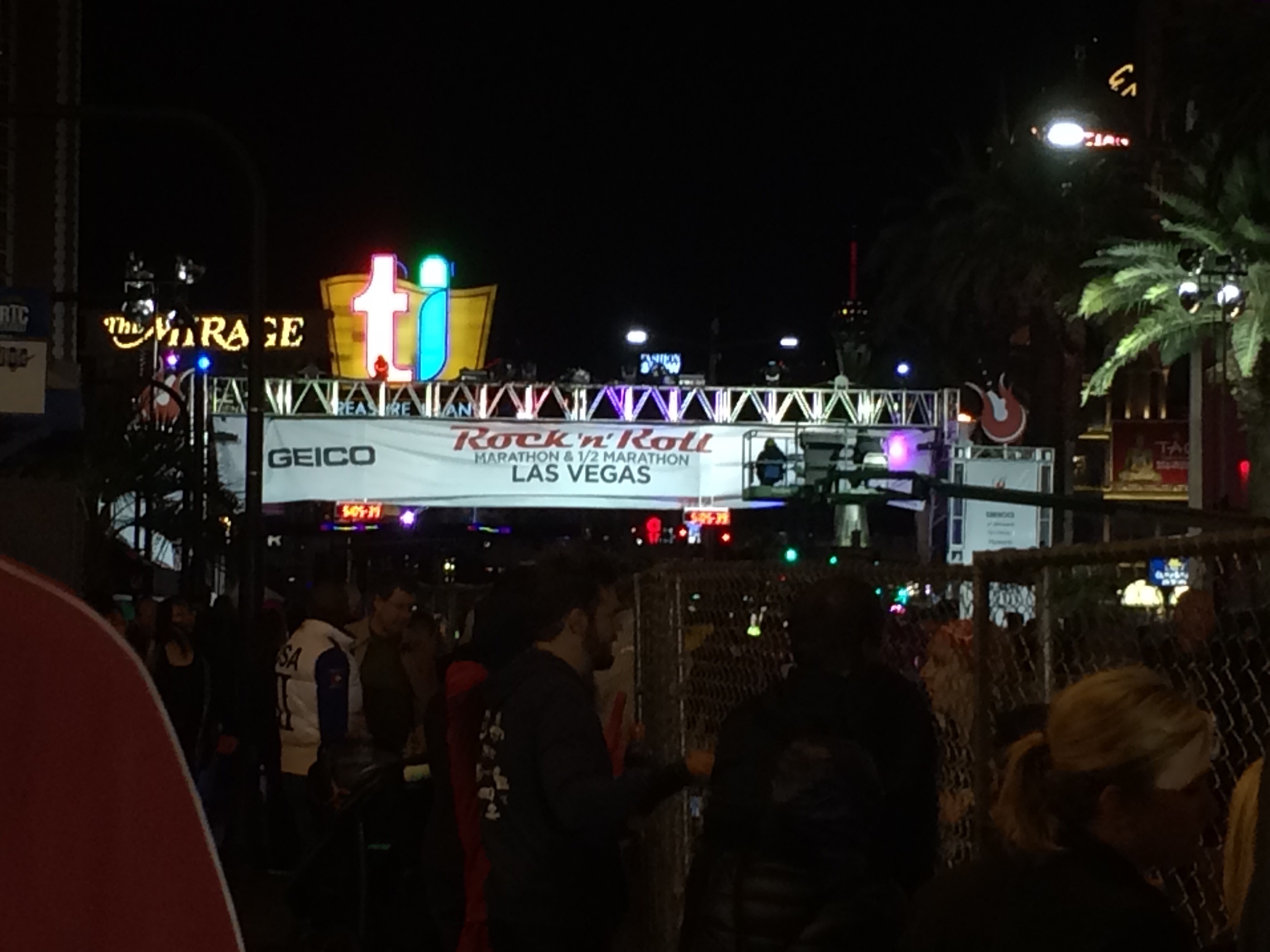 Mom and I had an incredible time in Vegas leading up to the race. We were covered in prayer, and I want to say a big thanks to everyone who prayed for us. Throughout the trip, we were truly blessed.

We had a blast at the expo, and Mom rode the mechanical shoe! 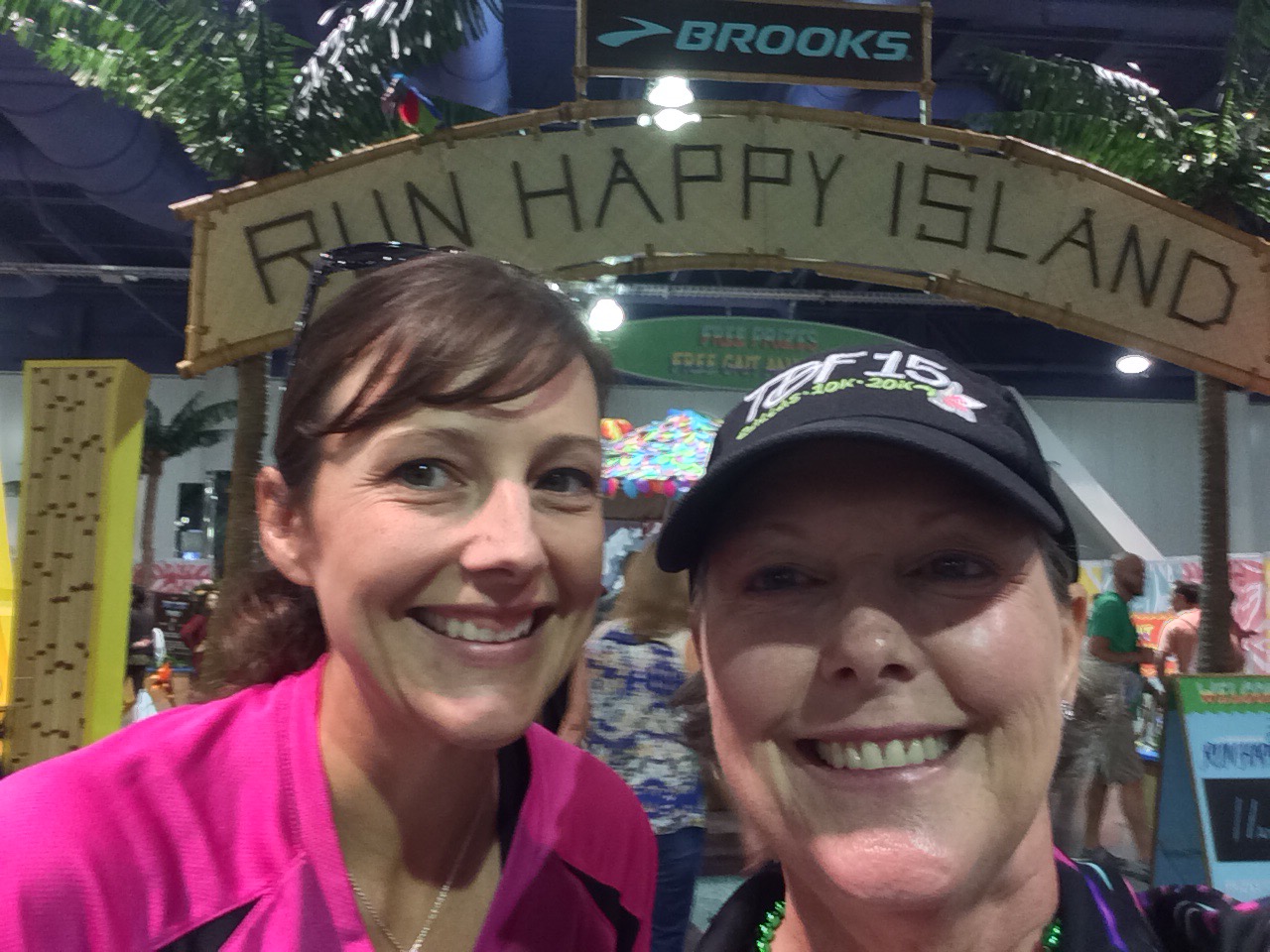 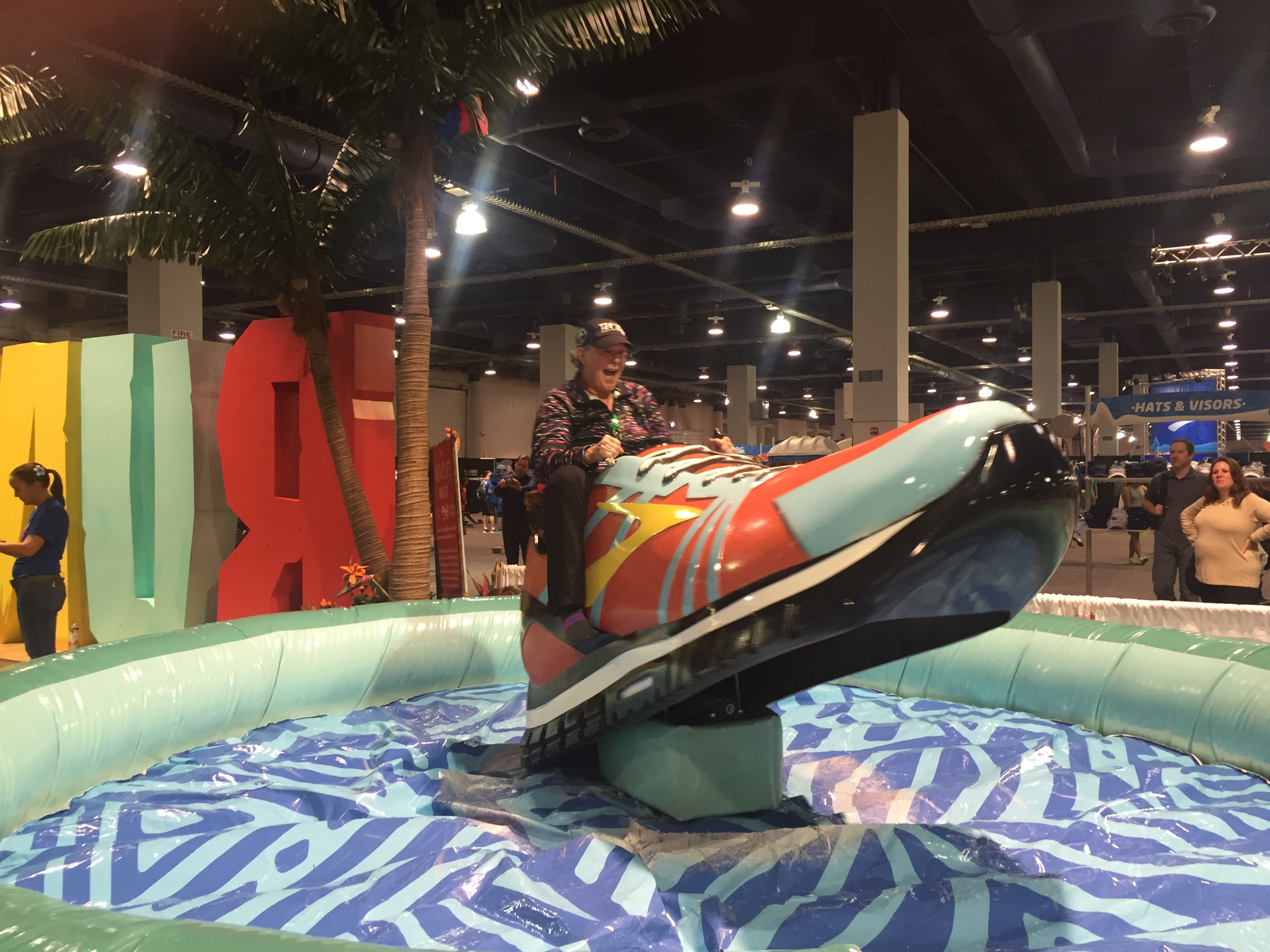 We had multiple divine encounters.  God revealed Himself through Cirque Du Soleil. There were rainbows everywhere, reminding of God’s promises.

He was faithful in speaking through the Bellagio fountains, and we were both overcome with worship! 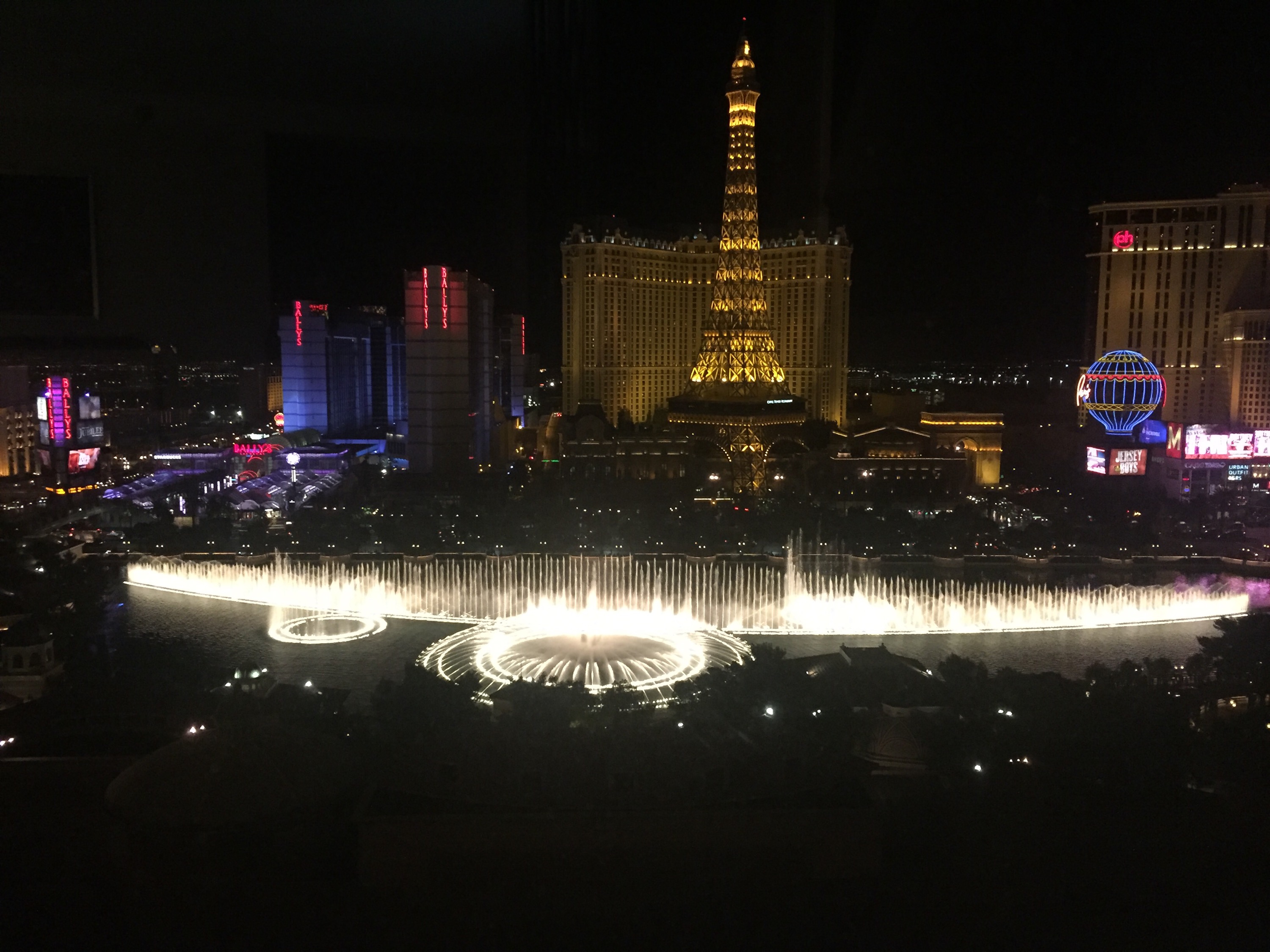 I went into this race with the satisfaction of knowing that there was not a single thing I would change about my training or preparation for the race. I felt ready and was proud to sport the eagle for Team RWB–which instantly connected me with others who run for our veterans. 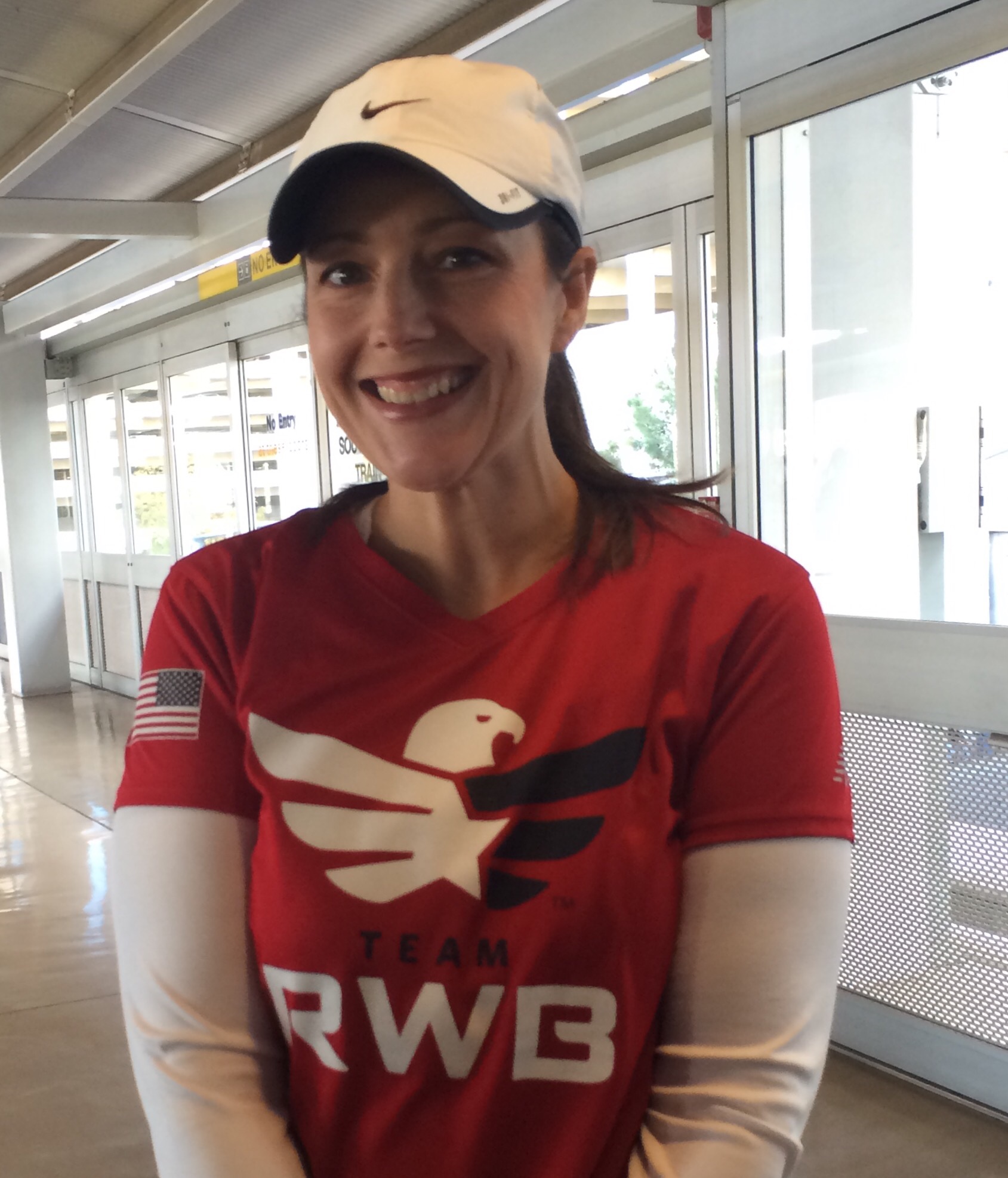 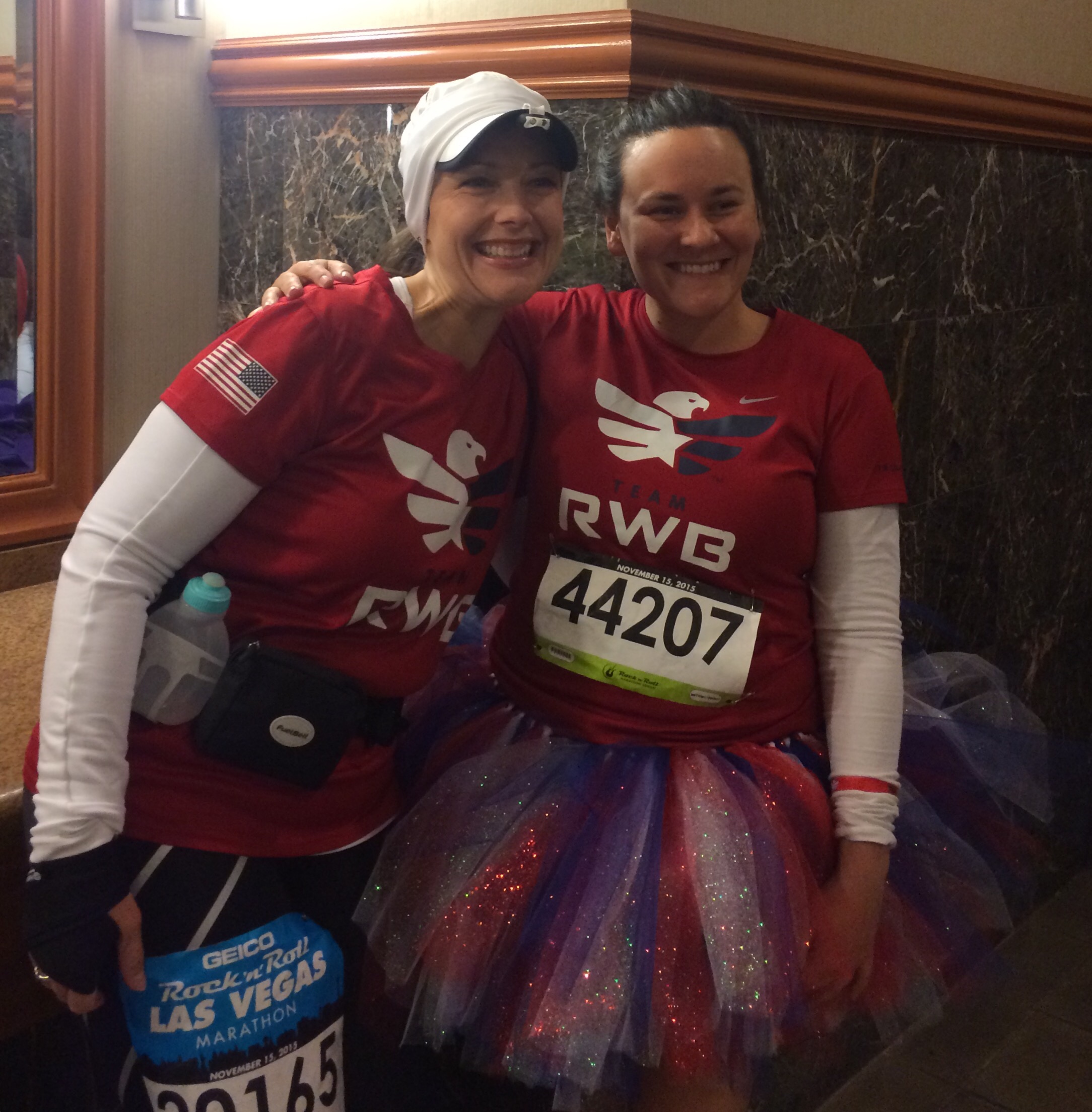 I was hoping for a PR and believed I had a shot, but for this race, PR turned out to mean “prayer run” rather than personal record.

God has been vamping on this theme of water in the desert for months leading up to this race, using the fountains, and bringing up scriptures about rivers of living water and streams in the wasteland. As I reviewed what He has been saying and prayed about my focus for the race, He gave me Isaiah 35 to pray for the city and the people of Las Vegas. It’s a beautiful chapter that talks about bringing life to the desert and God creating a “Highway of Holiness.”  So that’s what I prayed for as I ran down the Vegas Strip! 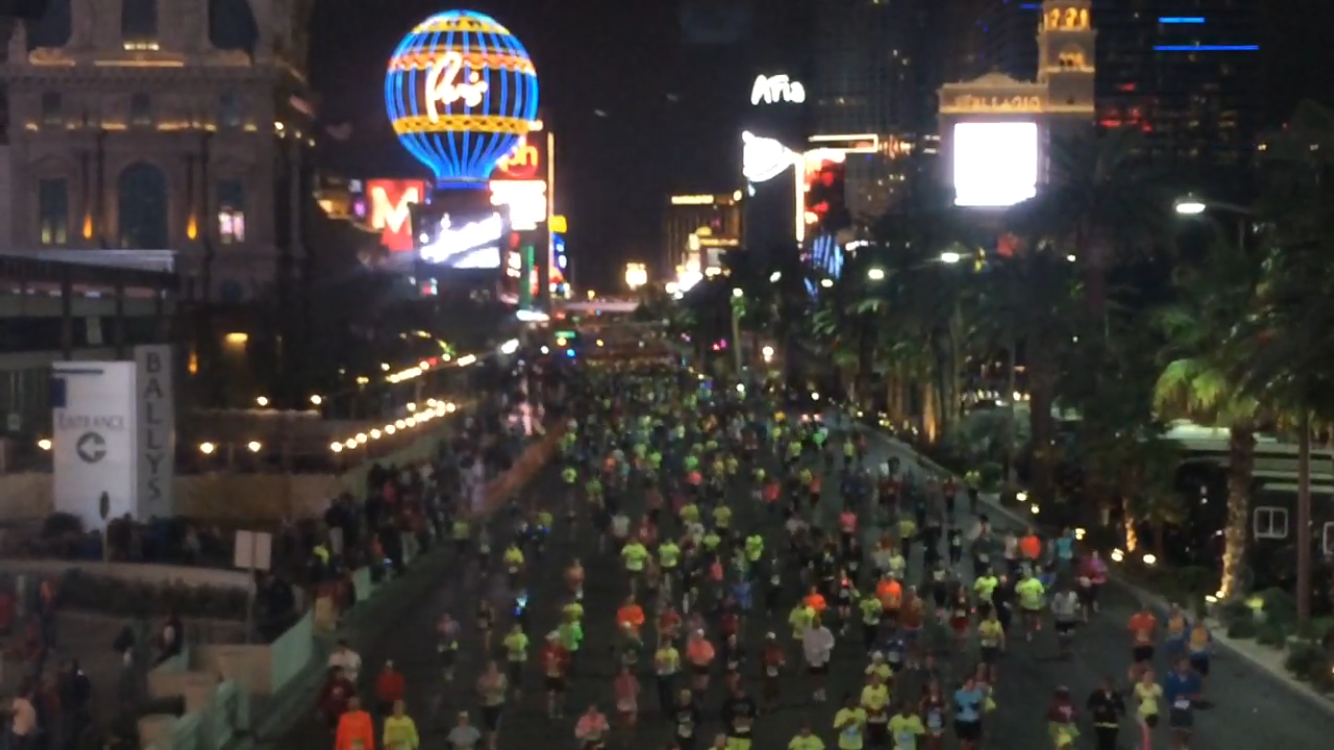 The first mile was a little tough, as we ran into the wind. Winds were in the teens thorough out the race, with gusts over 40 mph. That helped when we turned around, and it was at my back…but I knew I had to save something for the return trip when it would be in my face again. During these early miles, I felt good but got a little wet because it started raining!  God wasn’t kidding about water in the desert!

I slowed a little around mile 10 because as I looked around, all I saw were half marathon bibs!  For the longest time, I couldn’t find a single soul running the full and worried I had missed the turn!  Turns out, there were almost 10 times as many people running the half.  So when we finally split, the race went from a crowd of 25,000 runners down to a small few–so few I wasn’t sure I knew where to run late in the race!

I continued to run well and stayed on PR pace for almost 18 miles. My friend Pam was kind enough to text me updates on the pace I needed to maintain based on my average after each mile. But about 12 miles in, I started having tummy trouble, and I knew that was it. Though I held on a bit longer, I knew that plus the headwind for the last (toughest) 8 miles would cost me the PR.

So I relaxed. And ran happy. And prayed for rivers of living water to flood the streets of Las Vegas. I prayed for God to pour out His Spirit and reveal His love and His great compassion to the people there–locals and visitors alike.

I gave half a thought to trying to push myself again, but accelerating exacerbated the GI distress, so I settled back in and genuinely enjoyed the run, as much or more than any other marathon I’ve run. As long as I didn’t go too fast, I felt reasonably good, and I had FUN. And slowing down just gave me more time to cover the city in prayer!

My Garmin died at 26.17, and I still had to run about 4 minutes to reach the finish line…which I did before the 5-hour cutoff. 🙂

It was disappointing to have done everything I know to do and still not have the time I hoped for due to circumstances beyond my control. If the race had been Saturday night (or we’d had Saturday’s weather Sunday night), different story.

If there was no tummy trouble, also a different story.  I still don’t know what caused it, as there were only very slight variations in my carefully rehearsed fuel plan leading up to and during the race. Maybe it was all those little butterflies I felt before the start!  My stomach continued to be a bit sensitive even the next day, though, affecting my post-race refueling. So maybe I was fighting some kind of little bug. Who knows.

Even if I couldn’t PR, I had hoped to beat my time from Utah Valley in June. I missed that mark by about a minute. But I had to remind myself that this time, I didn’t have gravity helping me (1700 foot net drop in Utah!) and had the wind working against me the last third of the race. The fact that I turned in a comparable time (and didn’t end up in the medical tent!) told me I AM getting stronger.

Even though it wasn’t the finishing time I hoped for, there were several wins for this race:

God made it clear that to me that the biggest win of the night, however, had nothing to do with my running performance. The prayers that were offered that night will have a significant impact that will echo throughout eternity. The medal I received at the finish is nothing compared to the glory that night will bring Him! 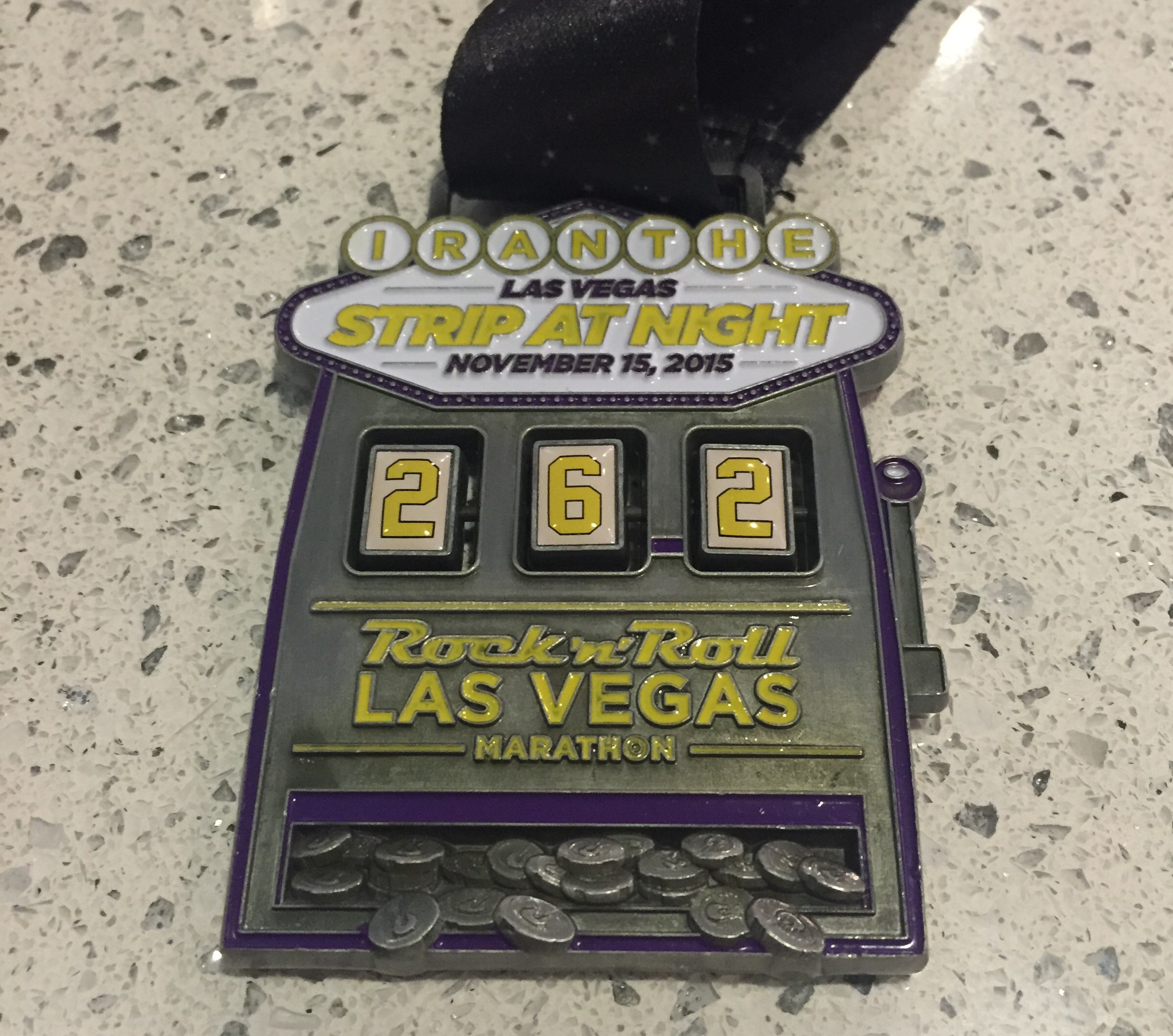