Ever since I learned that there were people who ran beyond 26.2, I have been intrigued by ultramarathoning.  I was signed up for a 50K a year ago but had to take a DNS due to injury, and I’ve had to wait for my chance to join the club.  Today was my day.  🙂

No race.  Just a training run.  Me and the road.  I had my sights set on 50K.  I had my choice of routes and considered running a 4.5-mile loop seven times around my neighborhood.  It’s fairly flat, and the houses offer some protection from the wind.  But I didn’t take the easy route (literally).  Instead I opted for a more challenging course that combined two others I like for semi-long runs.  Some of the hills are doozies, and I knew I would be much more exposed to the wind.  But I didn’t want to punk out on my first ultra, so I opted for the tougher route.  At least being farther from home would make it harder to quit! 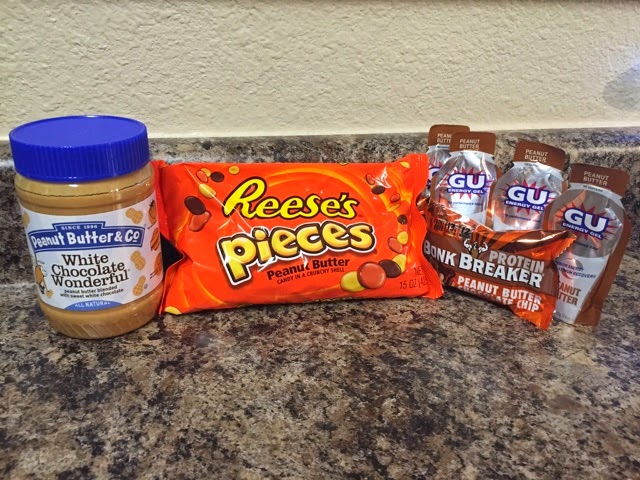 But I also fueled this run with the Word of God, which has been compared to bread, so it’s basically like carbs for your spirit.  🙂
The first ten miles or so, I meditated on Romans 12:1, which urges us to offer our bodies as living sacrifices as a form of spiritual worship.  I kept coming back to the idea that this run was an act of worship.  When you think about it–a girl who used to have life-threatening asthma, was once grossly overweight, and who still has a malformed heart valve and hardware from four foot surgeries…running an ultramarathon just for kicks–that is a testament to the God of the Impossible.  My running is a miracle.  And living the miracle is a way of worshiping the One who brought it into being.
Then I figured if I was going to run 31 miles, what better time to focus on becoming a Proverbs 31 woman?  Starting at mile 10, I meditated on one verse every mile, praying for God to form those things in me as His bride and so that I can be a godly wife for my future husband.   There are some real gems in there, but these were two of my favorites, perfect for distance running:
Mile 17: She is energetic and strong, a hard worker.
Mile 25: She is clothed with strength and dignity, and she laughs without fear of the future (like what will happen over the next 6 miles!).
Those verses, a new one every mile, really kept me going.
As for the run itself, the first half was pretty good.  I opted for a 4/1 run/walk strategy to be as gentle with myself as possible.  I enjoyed a few Reese’s pieces every 15 minutes (which probably gave me more of a psychological boost than anything) and gels at miles 5 and 10.  Halfway through the run, I came back by the house, scarfed down a peanut butter and sugar sandwich, picked up more fuel and refilled my water bottles for the second half, changed socks, etc.  I was cruising along for the next few miles after I resumed, but that’s when I hit the hills.  After 20 miles, running up steep hills did not seem like a wise use of my remaining energy, especially with a third of my run still to go, so I committed to walk the hills and run the flats and downhills until things leveled out.
It was also during this stretch that I found myself running low on water…already.  It’s been a while since I’ve had to run when it was close to 80 degrees, and I was going through it faster than normal.  I was planning to refill my three 10-oz. bottles at the park that was the turnaround point 7.5 miles from home, but halfway there, I was concerned about making it there on what little I had left.  I prayed for a solution.  I happened upon a guy sitting on his front porch, asked him for water, and he kindly obliged.  As I walked past his front door, I noticed a picture of Jesus sitting on the entry table.  Perfect!  🙂
I resumed my journey to the park and turned around to head home.  The wind was brutal.  I kept telling myself that it would only make me stronger, reminded myself it was just a hint of the power and force God is capable of, thought about Jesus as the One whom the wind and waves obeyed, and remembered that the Spirit had been described as a mighty rushing wind.  I reasoned that the Spirit of the Living God inside of me propelling me forward was stronger than the wind that was against me.  Still, hours of running against the wind (and having Bob Seger in my head) had taken their toll, and I got text support from my folks and a friend for the home stretch.
Once I got past the hilly part, I more or less resumed the 4/1 run/walk plan with only a couple of exceptions (one being stopping at a model home to refill my bottles once again).  I had already given myself permission to walk the hills that would pop up the last couple miles…but when I got there, I decided not to.  Though I hadn’t had a specific time goal, I saw that I had a shot at being under 6.5 hours.  I wasn’t 100% sure on the math for how much walking I could get away with and still hit that, so I decided just to go for it, skip the walk breaks (though I did have to stop for 2 traffic lights!), and run the rest of the way.
As I pressed on, I thought about my grandparents.  Although I’ve been blessed to share my running adventures with my dad’s parents, my mom’s folks have been gone for years and only knew me as the asthmatic child.  They never got to see me become a runner…at least in this life.  I thought about my grandfather, who had always reminded me of John Wayne…a man with “True Grit.”  And I thought about my grandmother, who was a P31 woman…strong, ambitious, industrious, creative, and definitely a smart cookie!  I thought about the strength and qualities that both of them have passed down to me and how that was being manifested today.  It drove me up those hills and to my goal. 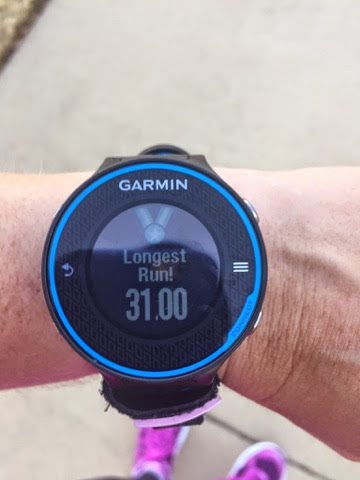 I am so happy to have completed today’s run, and I know based on how I pushed those last couple of miles, I could have kept going if I’d had to…but I’m not sure how far.  Knowing that people do races of 50 and 100 miles and more, I think of 50K as “baby ultra.”  Today’s run gives me pause about going farther.  It was tough.  With my current plan, I probably won’t have another chance to take a crack at anything beyond 26.2 until after Utah Valley in June, but I’d like to do another 50K before I decide whether I want to try 50 miles.  Maybe if I could take out the hills (1000+ ft elevation gain today versus 68 ft for the Erie marathon!), tone down the 17 mph winds, or not run in temperatures 25 degrees higher than what my body has become accustomed to over the past couple of months, it wouldn’t seem so daunting!  Any one or two of those would have made it challenging, but the combo of all three was humbling.  So I’d like to try it again under different conditions and see how I feel.  Maybe this is like childbirth…they say you forget the pain before you do it again!

We’ll also have to see how God wants me spending my time.  Training beyond 50K would require more time than I’m putting in now, and He may want to me allocate my time and energy elsewhere…or not. I definitely felt His presence today throughout the run.  I had to stay connected so I could draw on His strength.  So perhaps ultrarunning will prove a path to deeper intimacy.  Time will tell.  But in any case, I am grateful to have completed my first 50K and trust that God used it to forge endurance and the qualities of a P31, melding them together to make me more of the woman He created me to be.