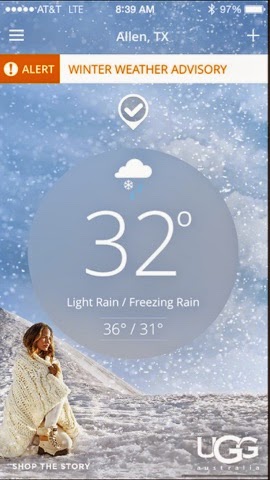 As I was praying about my strategy for this race, 4:13 popped in my head. Though I developed a plan for a 4:13 finishing time, I rightly suspected it was a reference to Philippians 4:13.
We often see this verse and think it means we can accomplish anything, but if we look at the context of the whole chapter, it really speaks to being able to be content in ALL circumstances.
Pastor and triathlete Andy Wulff wrote a great post about how this applies to athletes:
http://tri4him.com/blog/2014/05/05/i-think-i-can-i-think-i-can-i-think-i-can/
So I had this in mind when I stepped on the course…in these conditions. 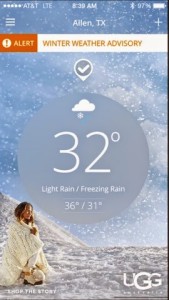 I had done the best I could to prepare for the cold and rain and had the forethought to take a pre-race selfie in the comfort of my home. 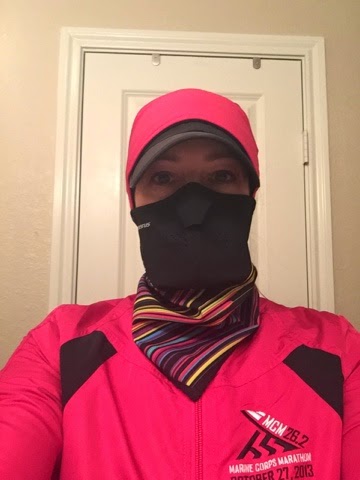 I put “run happy” on my bib so I could be reminded when people were cheering me on. (It worked!) 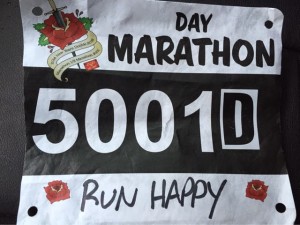 My race plan was simple. Just run 9:15 pace between aid stations and take a one-minute walk break at each one. That worked great…for about a mile. 🙂
Given that I had run ten consecutive miles @ 9:00 without a break in the cold drizzle at the Blue Red Half, I was surprised at how quickly I began to fall off my target pace, even with giving myself walk breaks every couple of miles. But with the rain, I was quickly waterlogged. There was no way to navigate around some of the puddles, so my shoes repeatedly filled with cold water.  Even my supposedly weatherproof jacket was soaked through. After the second of 4 loops, I stopped at the drop bag tent to change jackets and gloves…which helped for a little while, until those, too, were soaked.
In such miserable conditions, one might expect that I would be miserable…but I wasn’t. My mental strategy for this race was to go through the alphabet, one letter each mile, giving thanks for as many things as I could think of.  Normally the practice of gratitude draws my attention to modern conveniences like toothpaste and toilet paper (because who wants to live without those!), but I observed that on this run, my thoughts turned primarily to spiritual things…and then to food.  Being thankful for Miracles…and Marshmallows!  The Nearness of God…and Nestle’s Tollhouse! God’s Omnipresence…and Oreos!  Giving thanks with every step saved me from going into what could have been a very negative head space complaining about the weather and frustrated by my poor performance. Instead I stayed positive and just pressed forward as best I could. I was grateful to be alive and to be able to run.  I was grateful that at least the rain wasn’t freezing and becoming ice, which would have made things treacherous and possibly required them to cancel the race. I was grateful that my phone was holding up in the ziploc bag and still had plenty of juice, and the old earbuds I’d been wiling to sacrifice to the wet weather were still working just fine. I looked forward to the medal I would receive when I crossed the finish line and the sense of accomplishment of having my third marathon under my belt.
Though not at target pace, I stuck with my plan of only walking through aid stations.  I can’t give enough props to the volunteers who were out there for hours on their New Years Day in the rain and freezing cold. At mile 17, one of them reminded me, “You are a warrior.”  Working with combat veterans as a psychologist, that word has particular significance for me. I was honored to be compared to those I consider heroes, and that kept me going for several more miles.
Being an American was one of the things I was grateful for in mile 1. But this guy took patriotism to a whole other level. 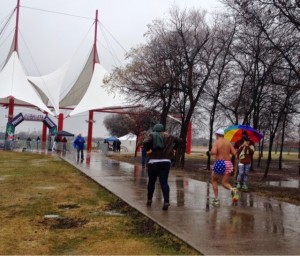 Besides Uncle Sam here, there was another guy wearing Texas flag shorts. Funny thing was, his kept falling down! Thankfully, he was wearing tights underneath. One cannot underestimate the value of comic relief, especially on a tough day.
Somewhere around mile 21, I so badly wanted to walk, but I kept telling myself, “Persevere.”  I would set my sights on an object in front of me–a tree or trash can–and tell myself all I had to do was run just a few feet to that. I made it to the aid station at mile 22, and when I finally took my scheduled walk break, I realized I was bonking. I staggered through the station like a drunk, and it was obvious enough to one of the volunteers that she walked with me for several feet. I tried to keep it together.  I didn’t want to get pulled off the course and miss my chance at finishing. I can do all things through Christ who strengthens me.
I at least had the good sense to walk a few extra minutes until I recovered, but eventually I picked it up and ran the last mile or so to the next aid station. They had pizza!  I didn’t care that it was ice cold. I thought maybe getting some extra fuel in me would help me finish, so I downed half a slice of pepperoni as I walked the loop for the turnaround, with the promise of hot chocolate when I made it back around.
The hot chocolate was so good I asked for a second cup. I continued walking to let things settle…and discovered Dean Karnazes I am not. The “ultramarathon man,” as his book is titled, is famous for ordering pizza to be delivered to a spot on his route and eating it on the run. He must have a stronger stomach than I do!  My choice to fuel did give me renewed strength but caused such GI distress that I never resumed running. I walked the last 5K. But even as I began to shiver with my teeth chattering uncontrollably, I kept thinking of things to be grateful for starting with X, Y, and Z. 🙂
The closer I got to the finish line, the more miserable my body became, but the more my heart filled with joy.  I thought about my running verse for 2015.
…we also rejoice in our sufferings because we know that suffering produces perseverance…
As I thought about how much I had suffered over the past several hours, I thought about all the perseverance it produced in me. I reflected that my suffering was nothing in comparison to the man who penned those words or to that of Jesus or to a lot of other people around the world. But it had been sufficiently awful in its own way. Bad enough that I thought about just stepping off the course and getting in my car, which I had to run right past on each of the 4 loops. (The temptation grew stronger on the third lap when I saw the half marathoners who were finishing getting in their warm, dry vehicles and driving away!)  But I didn’t. I didn’t quit. It occurred to me that the eternal significance of the perseverance and character formed in me through this race was far more valuable than a PR would have been, and I marveled at God’s work in me—that I could experience such joy and gratitude in the midst of the worst weather and my worst performance.  If I can be content even under those circumstances, I really CAN do all things through Christ who strengthens me!
As I neared the finish line, I was greeted by my friend Brian, who snapped this photo of me looking like a running ninja! 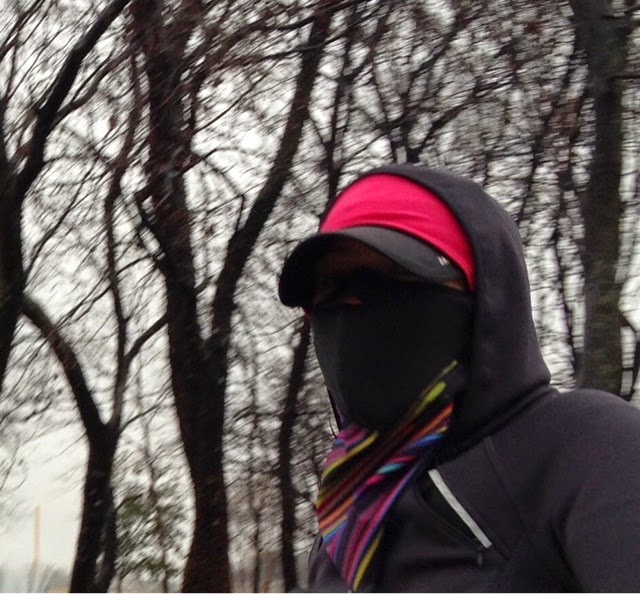 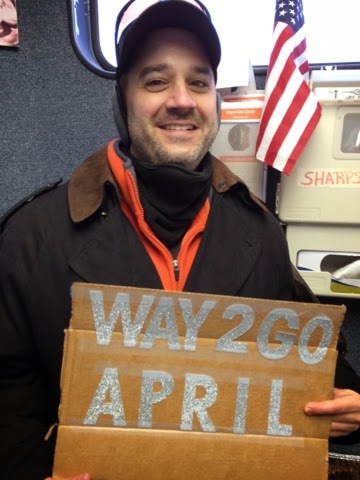 I’m pretty sure I was smiling for this one…but nobody knows for sure! 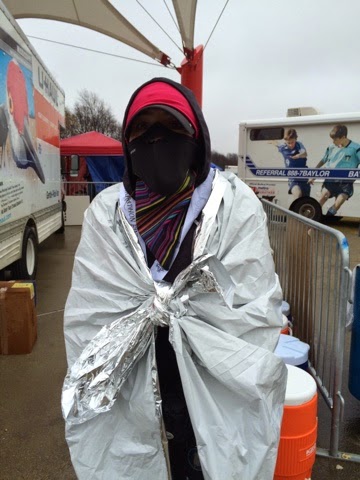 I got a big hug from my friend and my mom, who made the trip over in the pouring rain just to see me. Words cannot express how grateful I am for their support. 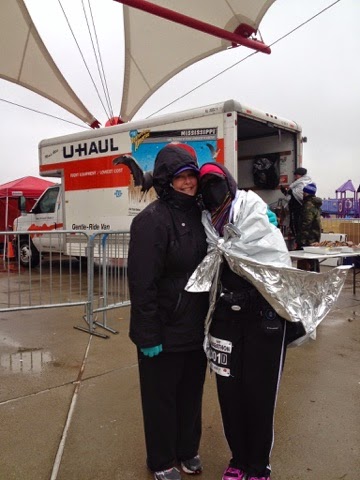 After the race, we went out for a bite, and I eventually thawed out enough to take some proper post-race pics. Warm and dry, I was all smiles! 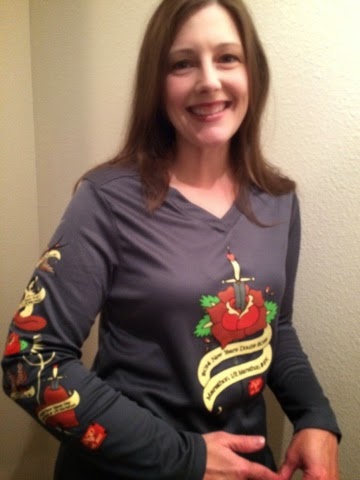 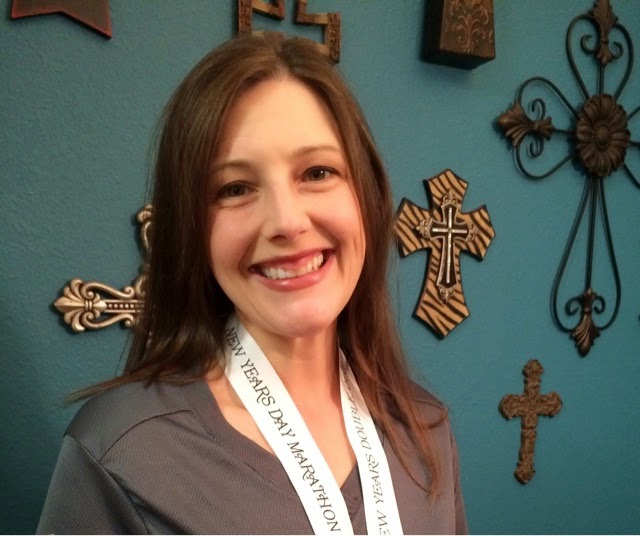 This medal that will serve as a reminder that this was one that I ran with my heart. Not that I could ever forget. 🙂 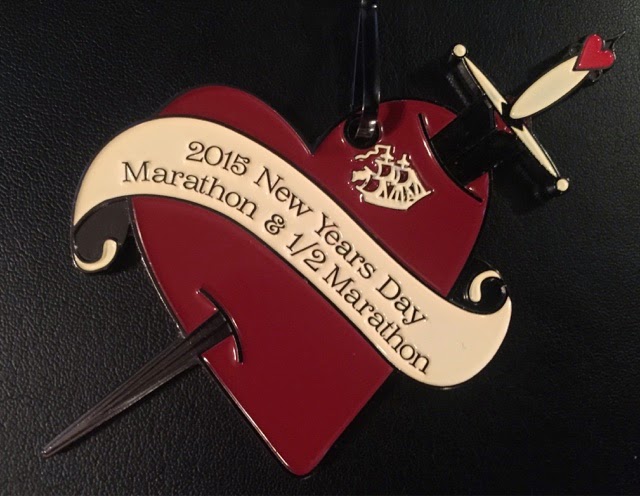 Epilogue
When it takes you nearly six hours to run a marathon, it seems silly to even think about checking to see if you won anything. But I figured a lot of runners hadn’t shown up because of the weather and knew several who did had run the New Years Eve Marathon as well. I forgot to stop by the awards tent but checked results online from the warmth of the car. I was 4th in my age group, just missing the awards, which were for the top 3. Oh, well. No big deal. Drive on.
The next day my dad said something about me being 3rd in my AG, so I checked again. Turns out the fastest female overall was in my age bracket. Since she won the overall award, she was ineligible for an Age Group award, and I got bumped up to 3rd!
I already felt like a winner because I finished and kept a good attitude the whole race, but this was icing on the cake! I was shocked and thrilled. Even more so when I saw that I had beat out the girl behind me by a mere 30 seconds. Over the course of 26.2 miles and almost 6 hours, it had been that close. It made me think of all the little moments when I had pushed myself to keep running my best. Though I had no way of knowing at the time, those moments mattered. Wow.
The day after the race, I drove back to Allen to collect my award. 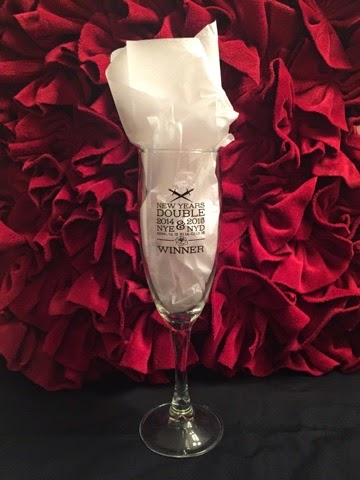 It was well worth the trip…though one of these days I want to leave a race knowing that I’ve won, with my prize in hand. 😉
Maybe next time…