I Am Second – Race Recap

This was my just my second time racing a 5K, my first in 2 years.  My left leg had been acting up since a speed session in early October, so I’d backed off my training and had no idea what kind of time I’d put up.  I was hoping to PR (over my best time from a training run last summer) but remembered the morning of the race: I should probably set an additional goal so I can succeed even if I don’t PR.  My other goal was to run a smart race with a negative split.  I wanted to run by feel and not be in my head, so I put a happy face sticker on my watch and just ran as fast as I could.

I could tell I was having a good race when I found myself surrounded by men because most of the ladies were behind me.  But I had no way of knowing how good until I crossed the finish line.  Not good enough to PR.  🙁

And not good enough to get a medal that day.  They announced winners for ladies ages 30-39, and I didn’t hear my name called.  Oh, well.  I was still grateful that my friend Mark had been gracious enough to wait around with me, and I was happy that I had at least run a negative split with my last mile being the fastest.

Just for grins, I checked the official results.  My initial disappointment was more than offset when I saw that I had actually come in third among females 35-39 and finished ahead of 90% of the field–including the boys!

I flashed back to gym class and the Presidential Physical Fitness Test we had to take every year.  I remember the humiliation of having to call out my run times.  (Insofar as these were supposed to be measures of physical fitness, I think they should be treated as Private Health Information protected by HIPAA!)  It seemed like I was always dead last in my class.  And now I am in the top 10%???  Must be a God thing!!!

Upon checking the website and communicating with the race directors after the fact, I learned that they made a mistake with the 5K awards and that the age groups were indeed supposed to be in 5-year increments, not 10.

Today, I got this in the mail. 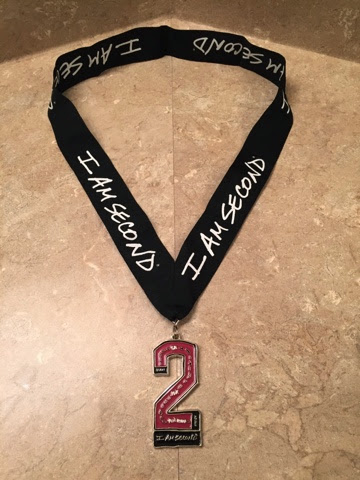 So, now it’s official: I took third in my age group at the I Am Second run–my first running award ever!

Because of the way things unfolded, my first win was anti-climactic to say the least.  But in a strange sort of way, I think it’s perfect.  The whole story behind the I Am Second movement is the idea that God comes first, and everything we do is for His glory. Not hearing my name called or getting a medal on race day–not even knowing I would get one until several days later…this was not about my glory.  It’s about God’s.  I am second.