The Erie Mararthon is an experience I’ll never forget. 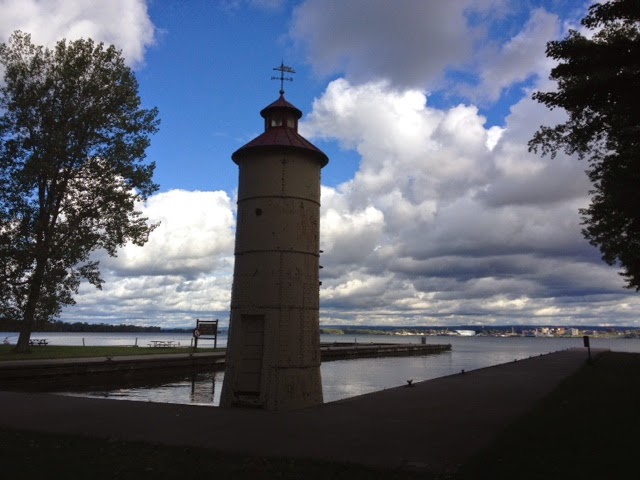 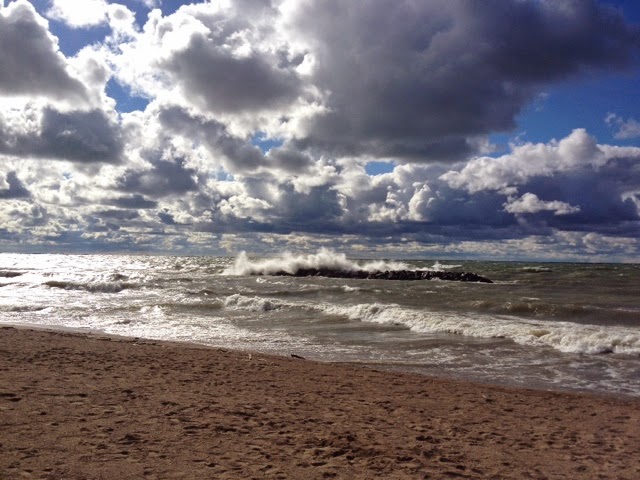 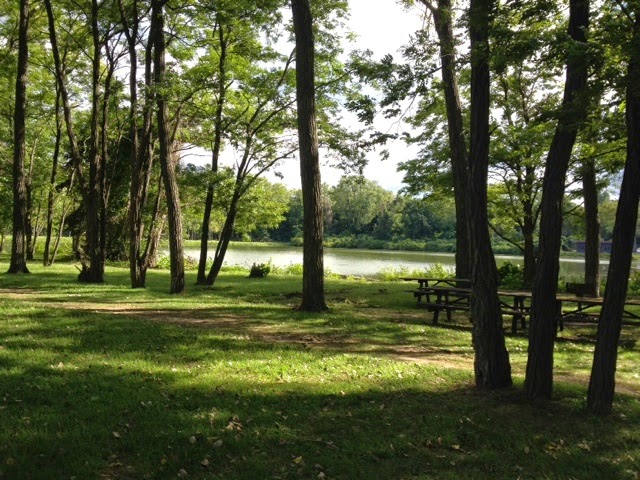 The course was even flatter than advertised (only 68 feet total elevation gain!), and the weather was perfect for a marathon–50’s and just 4 mph wind.
No idea how those cooler temperatures would affect me, but I was determined to Run Happy. 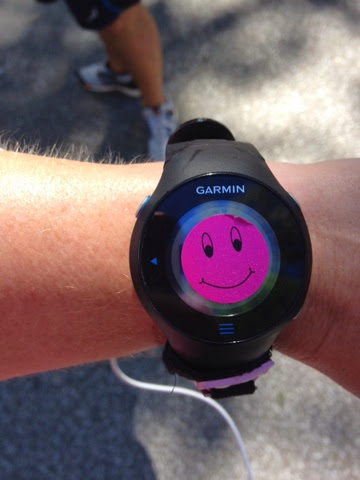 The race itself went something like this…
Mile 1 – 26 miles, 26 letters of the alphabet. For each one, I focused on a different characteristic of God. The first mile was dedicated to the Almighty.
Mile 3 – Feeling good and taking it easy but felt myself speed up just a tad when I passed a guy holding a sign that said, “You’re all Kenyans!”
Mile 4 – Water station manned by super heroes…reminding me that I have the chance to “be a hero” by running and living in a way that inspires others. Flashback to the woman who called from her car, “You’re my hero!” as I was chugging up a big hill a couple months ago. Yes, those words of encouragement from a random stranger stick with you!
Mile 6.2 – Running happy & feeling strong!  Even though I have the sticker on my watch, there are clocks at 6.2 and 13.1, so I get a ballpark on my time. Not my fastest 10K of the year (which is good because otherwise I would have been going out too fast!), but still on pace to have a good day. 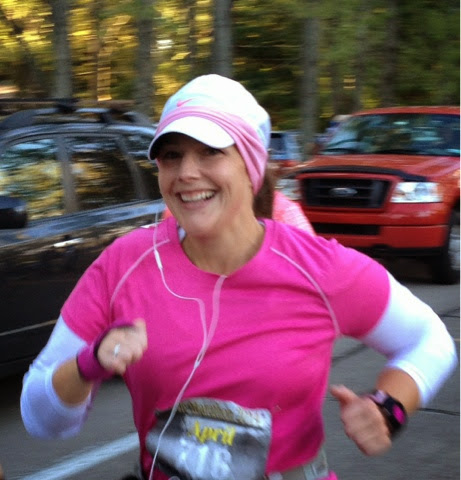 Mile 8 – Both feet hurt. Really?  Already?  Expected I might have issues the last third of the race, but I usually get twice this far without pain.
Mile 9 – Glad my brother will be joining me at the halfway point.  Planning to run 6 with me. I’m already beginning to wonder how I’ll run the last 7 on my own but push it out of mind. Cross that bridge when you come to it.
Mile 10 – Lots of great signs near the water station.  My favorite: Run like somebody just called you a jogger!
Mile 12 – Observed that my legs STILL felt cold even though I’d been running for a couple hours. Will I ever feel like I’m warmed up?  (The answer turned out to be no.)  Just one more mile til I see my bro.
Mile 13.1 – Jason hopped on the course (with tacit permission from the race director). Boy, was I glad to see him!  He just started running back in May and did his first half on a training run about a month ago.  So proud of him!
Mile 15 – Left knee hurting. Rats. The right had been giving me trouble the past couple weeks.  Now it’s fine, and the other one is acting up.
Mile 16 – Decision time. To this point, I’ve only walked the aid stations. But I can tell that between my aching feet, cold legs, and sore knee, the last 10 miles are gonna be tough. I ask Jason, “If we switch to a run/walk, do you think you could hang with me the rest of the way?”   He says yes and sets his watch to run for 4 minutes and walk for 1. Best decision I could have made.
Mile 19 – We get passed by an 80-year-old man. No joke!
Mile 20 – Just 10K to go. Jason keeps me entertained. We joke about hitch hiking with one of the cars driving in the lane next to us. 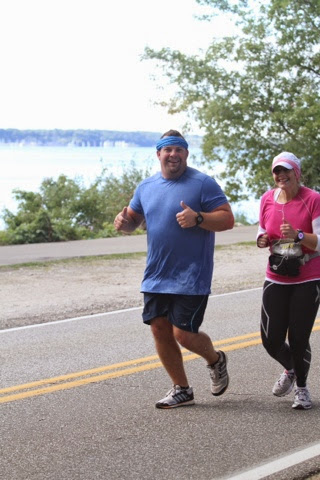 Mile 22 – I get run drunk. Brains run on glucose, and mine is tapped out. Fortunately, I’m a relatively happy drunk…
Mile 23 – 5K left. The sun is FINALLY starting to come out. Most of the course is lined with trees I would have been quite grateful for on my Texas training runs. After running for hours in the cold and shade, the sun feels AMAZING. Run drunk, I start singing the theme to Sesame Street (“Sunny days…”)…until I forget the words!
Mile 24 – I am beyond goofy. Thank goodness my brother is there to make me eat my last gel and drink the sports drink (which I’d passed up to this point because I didn’t like the flavor and got by just fine in training on the sugar & electrolytes from my gels).  I didn’t want to put anything else in my tummy, but J knew my brain needed the fuel and talked me into sucking them down.
Mile 26 – Silly as I was, I had managed to remember the alphabet.  Z was for a Zealous God cheering me on to the finish!  Jason gets me to pick it up on the home stretch by telling me we’ve got to pass this lady hobbling in front of us. It works!  We grab hands as we cross the finish line together! 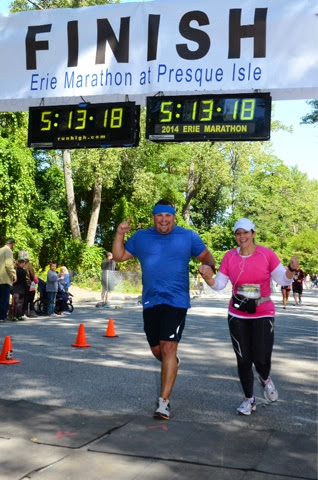 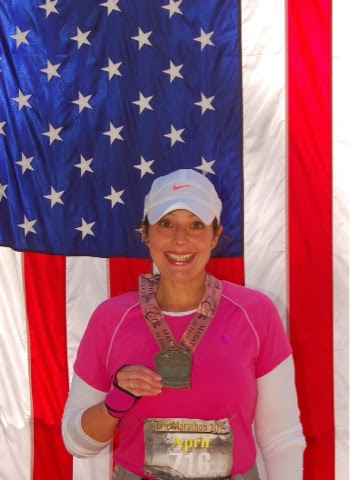 Post-race, I grab a medal and some chocolate milk. The next race is back to our hotel to get showered and packed, followed by a 2-hour drive to Cleveland and another race to the airport. Gradually, I regained my faculties, and in the hours and days since, I’ve had a little time to reflect on the race.

Although my finishing time on a relatively good day was considerably slower than on a bad day nearly a year ago, I see improvements and things I can be proud of:

– I finished.
– I did not have to visit the medical tent.  Win!
– I remembered my own name (which I struggled to do after the Marine Corps Marathon)!
– I ran all but the aid stations for the first 16 miles. Once I committed to the 4/1 run/walk strategy, I held that ratio for 10 miles, making exception only when there was an aid station, despite strong temptation to do otherwise.
– I can run for more than FIVE hours!  That takes twice the endurance of the elites!  😉
I still have a lot to learn about training, pacing, and fueling, but here are my biggest take-aways from this race:
– You will race like you train.  I basically only trained 3.5 months for this event. Due to the compressed schedule, I had only ten double-digit runs (10-20 miles) leading up to it. Because of my decreased level of fitness and how the Texas heat jacked up my heart rate, I was forced to slow down and run/walk pretty much every time.  Though I ran my fastest 13.1 and my fastest 20 of the year at Erie, ultimately the same was true. Even when the heat/heart rate was not a factor, my legs were not trained to go faster or farther. I resorted to run/walk, as I had in training, and my race pace was within seconds of my average pace on those 10 long runs.  Moving forward, I think this means I need to train like I want to race.
– Be good to yourself. I flew in a couple days earlier this time, and I think it helped (besides having a blast seeing ball games in Cleveland and Pittsburgh!). I also had better recovery with some stretching and massage stick when I got to the car and my “fancy ice pants” on the ride to Cleveland. I was much less sore after Erie than MCM. In the future, I’ll try to give myself an extra day before I fly out so I can relax after the race.  Catching a flight immediately afterward meant that I was in a hurry to get somewhere from the time I got up @ 4:30 until we boarded the plane13 hours later. Makes for a long day!
– Don’t marathon alone. At least not until I get super comfortable at that distance. Having Jason running with me was a blessing on so many levels. Just sharing the experience with him was the highlight of the day for me. But beyond that, I needed his encouragement to fuel the last few miles and have no idea what would have happened had he not been there.  I may not always have the luxury of a running partner, though now that I see the value, it’s definitely preferred. At a minimum, though, I hope to have someone with me who can make sure I get safely home from the race. I was way too “drunk” to drive. 🙂
– Some things are more important than finishing times. There’s no way to know what my time would have been had I run alone and not switched to a 4/1 at mile 16 (which the sticker on my watch would have prevented me from doing).  I might have run more the last 10 miles…though maybe not….and not necessarily faster. But even if I had been given the choice between a better time and finishing with my brother, I’d choose to finish with him.  It made the day!  So thankful for him! 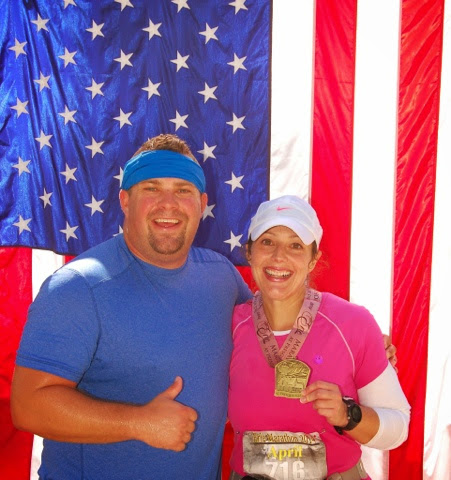