I was pretty pumped for today’s race. 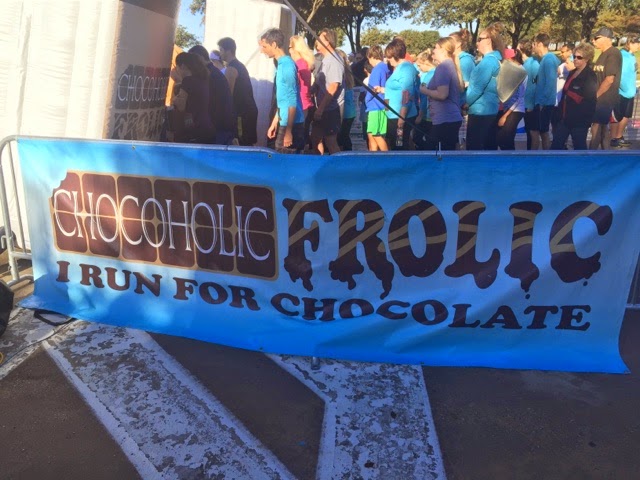 The chocolate theme was evident everywhere… 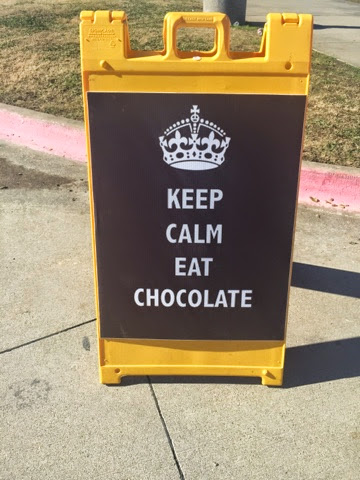 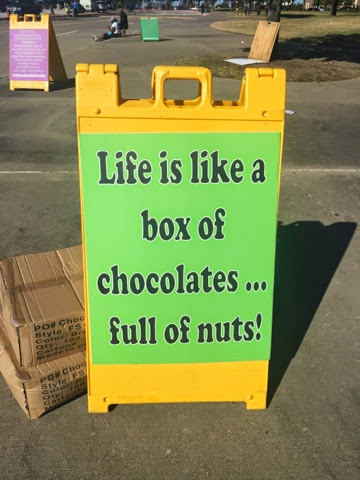 (Incidentally, the award for best sign today actually goes to a kid on the course holding one that read, “Run faster!  I just farted!”)
I arrived at the race plenty early with my friend Brian, who was doing the 5K. 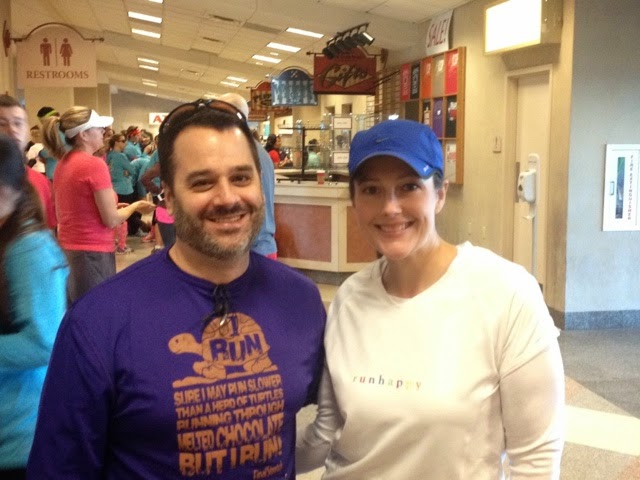 I had a good warmup and plenty of time to think about my game plan.  After going into nearly every race hoping for (and perhaps honestly expecting) a PR, I adjusted my expectations for today’s race based on the weather forecast.  I had PR’d my 10K in training just 2.5 weeks ago under perfect conditions.  It seemed unlikely that I would be able to beat that so soon while fighting double-digit winds.  So I scrapped my time goal and set a different kind of goal: Pass at least one person every mile!

I had a good first mile.  I had to pull back to keep from going too fast, using my recent PR pace as a gauge.
As it turns out, what was a perfect first mile pace a couple of weeks ago was too fast today.  Though my legs had been sore all week, cardio became an issue in the second mile, and I knew it wasn’t going to be my day.  The tendon that has been hurting off an on since early October flared up, too, so I figured out early I did not need to push too hard.  I switched gears from racing to making it a hard training run–as hard as I could without further aggravating the tendon or compromising future workouts.

I kept setting my sights on passing people, and that turned out to be a great strategy.  It kept me really motivated, even though my splits got worse with each mile.

I had hoped to run a negative split and realized that wasn’t going to happen.  I had also hoped to make the last mile my fastest, and that didn’t happen either…but I gave it a pretty good go based on what I had left.  I fell in step with a fellow Team RWB member (even though I was wearing my runhappy shirt today!).  His legs were about a foot longer than mine, but I kept up.  I felt like I could have passed him, but something told me not to, and I asked him to stay with me.  He did…and then encouraged me to kick it up the last .2! 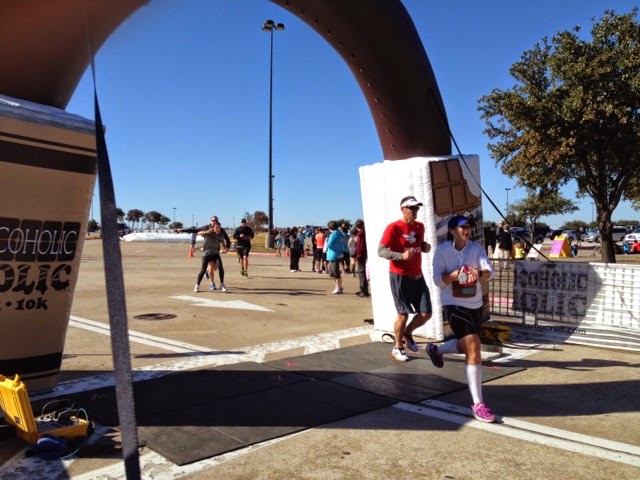 My last mile was not my fastest, but it was more than 30 seconds faster than the previous mile, and my pace for the last .2 was sub-8, so I finished strong!

My heart rate hitting 193 and my tendon pain persisting post-race is telling me not to fault myself for not running harder.  Compared with last week’s race, I am happier with my mental discipline today.  I adjusted expectations, but I never gave up and pushed appropriately based on the circumstances.

I think that’s the big lesson to be learned from today.  Maybe the last 2 weeks, if you factor in the long run I did 8 days before the Blue Red Half.  My Garmin calculates a “training effect” based on the duration and intensity of the workout, rating it on a 1-5 scale.  Last week’s race was a 5.0/5.0.  Though I backed off mileage and only did easy runs, I felt sluggish most of the week, and the training effect for today’s race was 4.5.  To put things in perspective, the TE for my last marathon was 4.4.  So in a sense, today was just as hard–even though I didn’t have to run an extra 20 miles!  Note to self: allow more time for recovery between races!

Even though my pace for today’s 10K was lousy (comparable to my pace for last week’s half!), I had fun.  Running for chocolate is quite motivating and made the finish extra sweet! 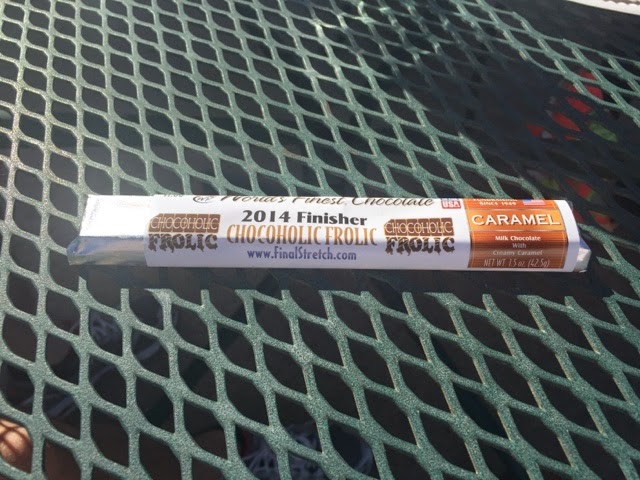 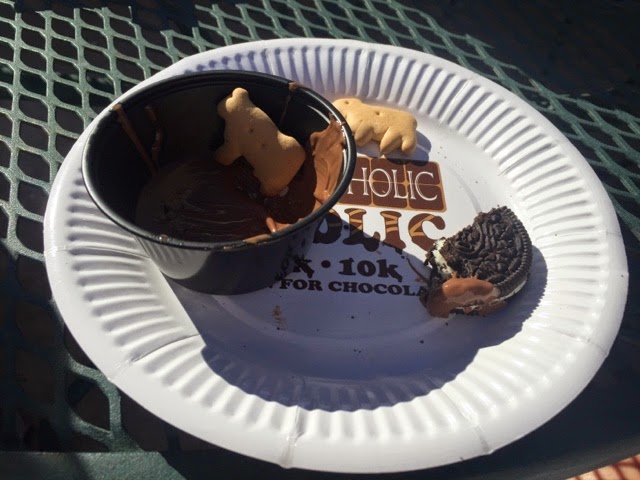 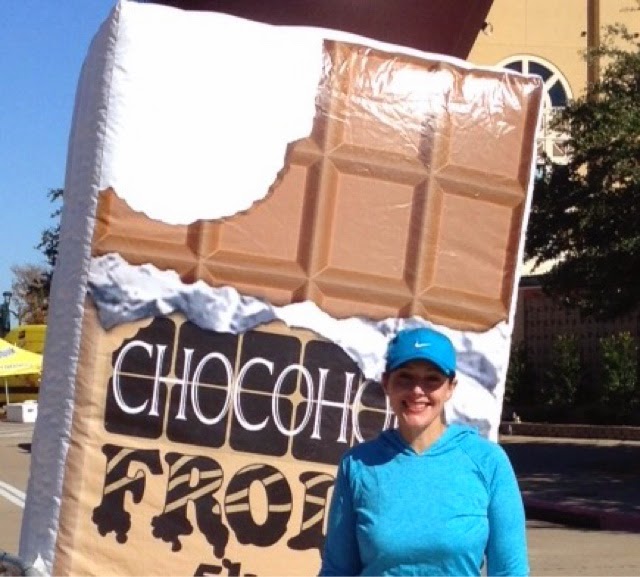