Place: Campion Trail in Las Colinas, TX
Time goal: < 2 hours
Non-time goal: Encourage at least one person every mile.
The Blue Red Run exists to honor our firefighters and police. Participants are encouraged to run for blue or red. I was torn. Although several people I care about are police officers, I’ve never gotten a ticket from a firefighter! 😉 Instead of choosing sides, I ran for the veterans’ organization Team Red, White and Blue. 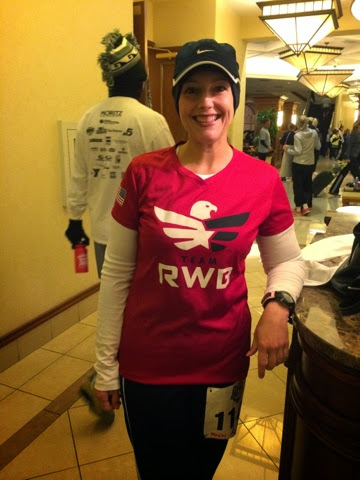 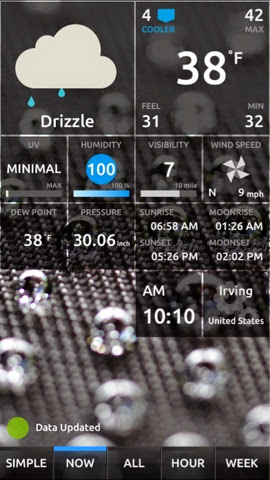 Plan: Stay with my friend Pam, who happened to be the 2:00 pacer, for at least 10 miles (then take off if it was a good day) or as long as possible (if it was a bad day).
Recap: From the very first mile, I felt significantly more challenged to maintain 9:00 pace than I had holding that pace four days earlier. Every single mile felt tough. My heart rate was over 180 by mile 9 and stayed there the last five miles. I stayed with Pam through mile 10, but the 2:00 group ran through that aid station–the first one I walked through.  They pulled ahead of me, and with my HR so high, I just didn’t have the umph to catch up.  I knew that with an average pace of 9:00 for the first 10 miles, I had a bit of a cushion to stay under the 9:09 required to get under 2 hours, IF the course was accurate. Measurements had been dead on to that point, so I figured I’d be okay. I was too far gone to do the math on exactly what pace I needed to maintain the last 5K. I tried, but my brain wouldn’t work, so I just kept running. I turned in a pretty strong mile…then the wheels started coming off.
After three miles of my HR being around 90% of max, I let myself walk one of the short but steep hills.  (I blame my beloved ultra buddies, some of whom care nothing about time, for putting this idea in my head!)  I resumed running but lost my resolve. I thought about my previous attempts to break 2 hours, the first ending in disaster and the second in disappointment, as the long course cost me my goal. I started having thoughts like, “Well, you know what it feels like not to meet this goal. You’ll survive.”  Yuck.
I turned a corner, got smacked in the face with strong winds and freezing cold drizzle. Though the headwind probably slowed me down, it made me think about “Pain You Enjoy” and made me mad enough to just want this to be over.
I never saw the marker for mile 12, but I slogged up the last big hill and about halfway through heard a paraphrase of Winston Churchill ringing in my head: Never, ever, ever give up. I looked down at my watch, realized I still had half a shot at coming in under 2, and found whatever gear I could find.
Long before I could see the actual finish line, I saw this: 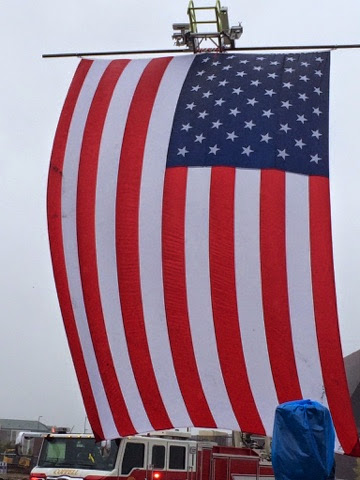 I gave it everything I had left running toward that flag.
The good news is that I checked my watch and hit the lap button when it said 13.1. Time: 1:59:41. Yay!
The bad news is the finish line was still .16 miles away. Official time: 2:01:05. Rats!
The better news is I’m pretty sure I did meet my other goal of encouraging someone every mile. I kinda lost track the last 5K but was still making the effort. It was energizing to encourage others, especially my teammates from Team RWB!  This was the only part of the race I actually enjoyed, so I’m very grateful God inspired me to make it a goal.
The best news is that it my suffering for that day was over, and I got one of these… 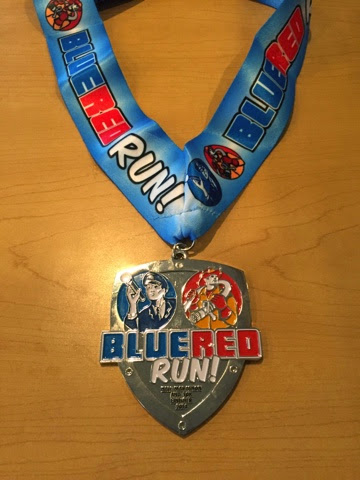 Final thoughts: My best guess is that the weather impacted my race. Though I am still adjusting to running in unseasonably cold temperatures, it was even colder for my great pace run on Wednesday, and my heart rate had stayed in a reasonable range. But with it drizzling the entire race, wet air was harder to breathe. For the first time, I had to have my sprayer soon after finishing, and I was still wheezing hours after the race. The fact that this is an exception when it used to be the rule is a reminder of how far I’ve come.
The weather was truly miserable the entire time, so I must give props to the supporters (thanks, Mom!) and volunteers who came out, as well as the firefighters, police, and military personnel who have to get out and do their jobs no matter how bad the weather is.
Between being cold and wet and my cardiovascular system going haywire, I cannot think of a single mile of this race I would characterize as “fun.”  Yet I was able to embrace the experience as my best training run of the year, sort of in the vein that what doesn’t kill you makes you stronger.  Being able to adopt this attitude reflects a kind of mental toughness I have developed…while what happened in mile 12 shows me where I need to get tougher still so I won’t be vulnerable to quitting.
Honestly, I could have pushed harder. Not much, but a little. Had I known I was going to be 10 seconds off my PR, I would have. (Because the course on my last attempt was even longer, I would have gotten it at Blue Red, even with my overall pace being slower in this race.  Then again, I’m not sure how much satisfaction I would have taken in PR at a slower pace.)  But I wasn’t even thinking about PR. Just the two-hour mark. There’s some consolation in my HR data suggesting I could not have taken 66 seconds off this race no matter how hard I pushed, which is what it would have required to get under 2.  But it’s an important lesson to carry forward:
NEVER, EVER, EVER GIVE UP!