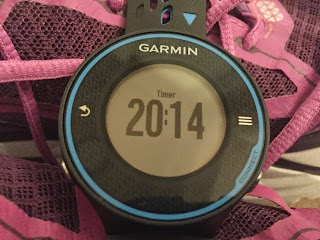 Not bad considering I only logged about 100 miles from January to April, as I was coming back from injury.
Firsts
– Age group award
– 50K training run
Race Highlights
– Erie Marathon – my brother jumping on the course and finishing the second half with me
– Tour Des Fleurs – running a 10K with my Dad, his Christmas gift to me from 2013
– That Dam Half – pacing my brother for his first official half on a course with a gorgeous view of the lake
– I Am Second 5K – 3rd in my age group (first running award)
– Chocoholic Frolic 10K – falling in step with a fellow member of Team RWB and pushing each other to the finish
Most Memorable Runs
– 5K in under 10 minutes while running the Caribbean (aided by movement of the ship!)
– Rainbows & Unicorns – long hot summer run praying about Boston 2016 ended with running through rainbows made by sprinklers
– Long run spent finishing the sentence Jesus is _______.  I never ran out of answers!
– 4-hour run that took a minute off my pace from Erie just three weeks before…I finished feeling fantastic!
– Praying Proverbs 31 over 31 miles (50K training run)
New This Year
– Shoes: Hoka One One Clifton – Like running on marshmallows. Love!
– Clothing: 110% compression tights with ice (a.k.a. “fancy ice pants”) – Like wearing an ice bath. Much less aversive and just as effective. No soreness after 20+ mile runs!
– Nutrition: EFS liquid shot, Chocolate #9 energy gel, Beet Elite Neo Shot, Sport Legs
– Gear: Garmin Forerunner 620, Bottle Band (makes ordinary water bottle easy to carry), wireless Yurbuds
– Workout: Alternate one mile easy, one mile hard (9-mile route near my house is perfect.)
– Training strategy: Spiritual meditation, messages, and music to keep my focus on God. Ran happy by putting happy face sticker on my watch. All of the data, none of the head games. Used it for Erie marathon, too!
– Racing strategy: Non-time goals. Thinking of something I love about God for every letter of the alphabet. Encouraging someone every mile. Passing someone every mile. Kept me going on days I didn’t have my best stuff.
Lessons Learned
– You will race like you train…so train like you want to race.
– No speed work too soon after 20+ mile runs. Oops!
– Know when to put fun ahead of finishing time.

– It’s not realistic to PR every race.  When conditions are not conducive, adjust expectations accordingly.
– Never ever ever give up.


This Year’s Running in One Word

Like a recording artist who follows up a promising debut album with a disappointing second, the paucity of PRs in my second year of marathon running may make it seem, on the surface, that this year fell short of expectations.  In some ways, it did.  But perhaps those were the wrong expectations.  🙂  Though the finishing times may not yet reflect it, I became a better runner this year.  I grew wiser, in part by making mistakes and learning from them.  This year was more about mental and spiritual breakthroughs than physical ones, and I believe those laid a solid foundation for my future, including my future as a runner.

Early in the year, Colossians 3:12 became the verse to guide my training for 2014:

Since God chose you to be the holy people He loves, you must clothe yourselves with tenderhearted mercy, kindness, humility, gentleness, and patience.

The gift of injury was more focus on God and fostering these qualities. Accepting humility as I discovered I was not yet capable of doing what I had been last year.  Being forced to be gentle with myself at the risk of re-injury and more time off.  Learning patience as I inched my way back to my former level of fitness.  If I measure my success not by finishing times but by the development of my character, 2014 was a pretty good year.  🙂