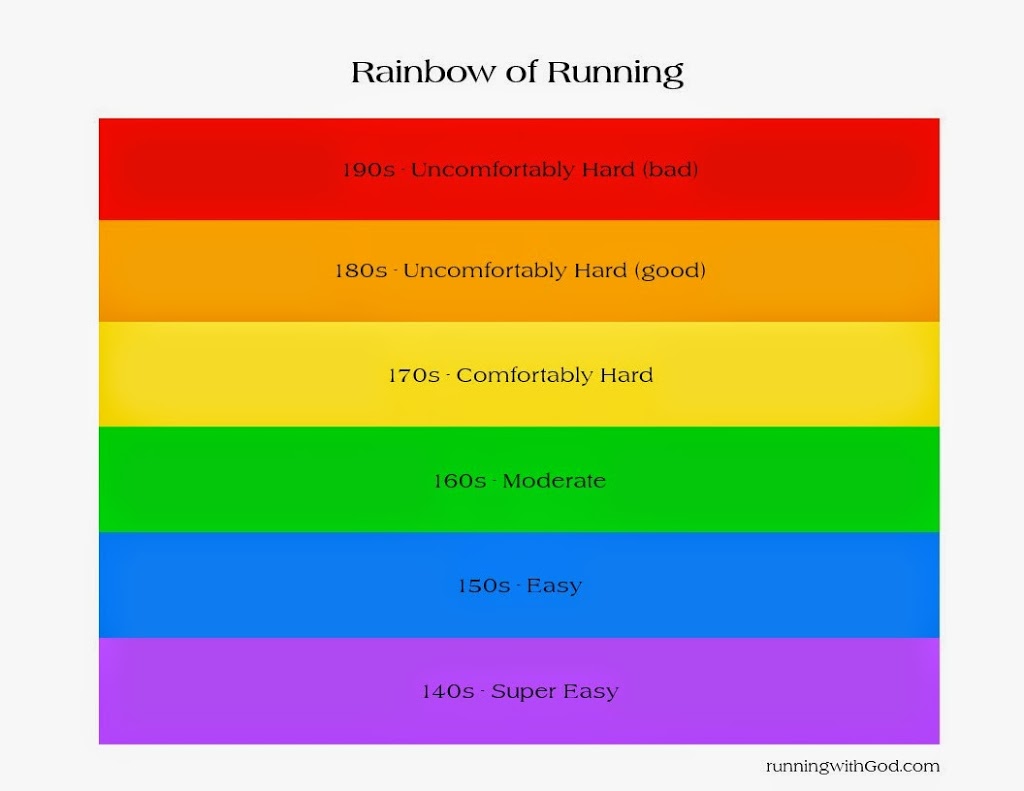 Sometime last summer, I was on a long run, praying about Boston, and as I ran through a series of sprinklers where the sunlight was at just the right angle, I found myself running through rainbows.  The phrase “rainbows and unicorns” popped into my head, and I now believe that the rainbows were more than a beautiful reminder of God keeping His promises.  I believe they hold the key to my training for Boston.

The rainbow is essentially a colorful way to describe heart rate training, with each color representing a level of effort and corresponding heart rate.

The beauty of rainbow training is that it’s based on effort.  As long as you’re willing to give the required effort, you will not fail–unlike pace-based training, where on a bad day, you may not able to hit the required pace no matter how hard you try…especially if the target pace was picked out of thin air (or off a conversion chart based on the race time you want to achieve).
The idea to return to rainbow running came just in time and has saved me from what would otherwise be a rather discouraging season.  During a recent time trial, my fastest mile was 8:09.  Um…three months earlier I ran FIVE mile repeats at 8:00–and that wasn’t even maximum effort.  Now I can’t even run one???
It’s weird to think about losing fitness when you’re training for a marathon and run your first 50K, but the data says I have indeed lost speed over the past few months.   Looking back, the injury flare-up cost me 3 months of speed work, during which time I also sacrificed miles to illness, taper, and recovery.  Add in that growing up with asthma, it has always been harder for me to breathe in the cold.  Plus all the layering makes me feel constricted–like I’m wrapped up in saran wrap. Put all that together and what do you get?  An 8:09 mile.
Very disconcerting when you’re trying to run 26.2 miles at 8:23 or better in 5-7 months.
Given the dismal data, I have been praying about whether “Boston 2016” means qualifying FOR 2016 (deadline: September 2015) or IN 2016 (which would be far easier not only because I’d have an extra year but because I get 5 extra minutes after my next birthday!)  As best I can discern, my directive is to continue to train FOR 2016.  That doesn’t necessarily mean I will make it.  But it means that training with that mindset–gazelle-like intensity, to borrow a phrase from Dave Ramsey–will produce the perseverance, character, and hope that God desires in me.
So I am staying on course until directed to do otherwise.  I am responsible for obedience (and even that is made possible by His grace).  He is responsible for the outcome.
The funny thing is that the symbol of the Boston Athletic Association, the unicorn, is a mythical creature–somehow fitting since the whole idea of qualifying this year seems like a far-fetched fantasy. 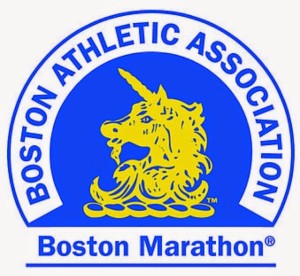 But God reminded me that He created the whole world out of nothing in 6 days, and He is a God of “suddenly,” doing in an instant what would normally take years.  Remember Jesus turning water into wine?  So if it is my God-ordained destiny to be at the Boston starting line in 2016, I will be, and nothing in the universe can stop me.  (If that’s not my God-given destiny, then I do not want to be.)  Based on current times, it seems unlikely, so if by some miracle I do qualify for Boston this year, everyone will know that it was just that: a miracle!